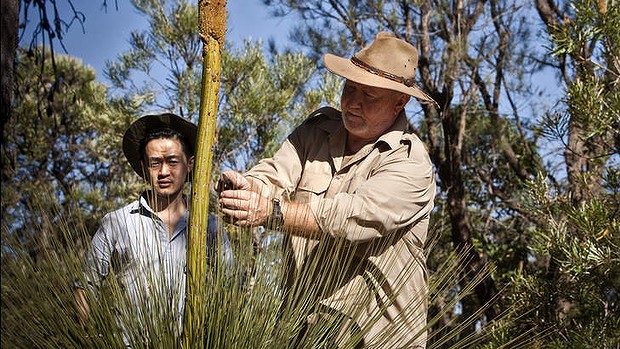 Flying into Western Australia from the east coast, all I can see are endless stretches of yellow and brown. If there is fresh water out there, it’s difficult to spot. It’s not hard to see how someone might, say, get lost, go insane and die of thirst out there. In the past three weeks alone, there have been six disappearances in WA. Four have been rescued and one has been found dead. One man is still missing. Looking out over the endlessly dry terrain, I don’t like his chances.

I’ve come to WA to learn how to avoid such a fate. Despite being a resolutely inner-city-dwelling ABC (Australian-born Chinese) homosexual, with only an arts degree and an expired first-aid certificate to my name, I’ve been tasked with spending a full day and night out in the bush to learn survival skills. Here, Bob Cooper, an Australian whom the BBC calls “a world authority on desert survival”, will teach me how to find water, attract help, build shelter and gather food – abilities that will prove useful should I ever find myself stranded in the middle of goddamned nowhere.

Based on my track record, this isn’t likely to go terrifically. The last time I went bush – when my Lutheran school sent us all on a one-month survival camp – I was 15. On hikes, my spine buckled under a backpack that was nearly half my entire bodyweight, until a female friend of mine offered to carry my pack on top of hers. During the “solo” part of the program – when we were each forced to set up overnight camp at screaming-distance intervals from each other – I accidentally stepped in my own shit. Nerds and nature: we just don’t mix.

So I’ve spent my entire adult life in cities (or places where you can at least buy a decent non-oil-based face moisturiser). When I told my friends I was going to do Cooper’s course, they mocked me with sadistic delight, and one sent me the link to a news item about a gruesome machete murder that had recently taken place in the outback.

Cooper picks me up from Perth Airport wearing exclusively earth-coloured clothes: sandy-beige shirt and sediment-grey pants. He is 58 and looks like Santa: pink cheeks, baby-blue eyes, trimmed salty beard and sandy-white hair. As he packs my bags into his four-wheel-drive, Cooper tells me he’s had a busy week. As well as running his bush-survival, tracking and snake-handling courses, he’s also been assisting state police locate the single remaining missing person who’s still out there somewhere.

When I ask whether he has any theories as to why people get lost, Cooper says, succinctly, “Technology” – specifically, GPS devices. The problem is simple, he says: they don’t always work. And when they don’t work in the West Australian desert, you’ve got a life-threatening situation.

Contrary to popular belief, though, Australia is not the world’s harshest continent, says Cooper. “It’s flat,” he reasons. “You can stand on a sand dune and still see around you, so getting around is easy enough.” The main problem with Australian deserts, he continues, is that they’re so remote (“as that missing guy is proving”). But learn how they work, he says, and they can protect you.

Cooper turns his attention to my clothes. What do I plan on wearing once we get into the bush? Part of me wonders whether my outfit looks ridiculous to Cooper – like I’ve unknowingly dressed like a gay-stripper version of how a bush survivalist is supposed to look. I tell him I plan to wear exactly what I’m wearing now: American Apparel Oxford shirt; Carhartt slim shorts; Vanishing Elephant leather boots; Japanese cotton socks.

“Did you bring any trousers?” Cooper asks.

“No,” I say. Cooper looks mildly disappointed. Shorts are okay, he says, but with trousers, you avoid scratches, mosquito bites and sunburn. It sounds ridiculously obvious once he says it, of course, but it’s too late to do anything about it now.

We drive south from Perth to a fenced-off reserve that Cooper uses specifically for these courses. When he stops finally, he points out of the window and asks me what I see. If I’m honest, I don’t see much. Lots of nature. Potential death. Wake In Fright and Evil Angels. He invites me to walk into the seemingly endless scrub with him.

He points to some red resin at the base of a tree that’s as bright as a boiled lolly. It crumbles as soon as I touch it. Cooper tells me to crush some in my hand and add a little water. It smells like iodine. That’s right, Cooper explains: it’s a natural anaesthetic. Nearby moss can serve as a poultice for wounds. Grass trees are a source of water and food. Tea tree leaves can be boiled to make herbal tea. A succulent called pigface yields water when crushed. Suck a yellow banksia and taste nectar; the dead ones have velvety insides that are perfect for starting fires. I feel humbled and impressed. “There are your fire-lighting sticks,” he says. “There’s medicine on that dark-brown tree. Nectar there, a fish-trap there. They’re all your friends.”

We get to the reserve and unload. Cooper has brought 20 litres of water, so we’re definitely not at risk of dehydration. Still, he adds, some people have died of thirst with water still in their canteens. It’s because they sipped the water instead of drinking it. If you sip water, he explains, the liquid only gets used for digestion, not proper hydration. Out here, that can kill you.

Cooper shows me other ways of procuring water. We remove dead leaves and spiders’ eggs from a large gum-tree branch, then tightly seal them in a clear plastic bag. Plastic bags, I learn, are vital in survival situations. The sun’s heat will eventually make the leaves sweat, producing drinking water. Another option is to make a solar still: dig a hole, crush plant-life or urinate into it, place a container in the middle of it all and make the pit airtight by sealing it across the top with a plastic sheet. As the heat evaporates the urine and sucks the moisture from the crushed plants, condensation will form on the underside of the plastic sheet. Funnel the condensation down towards the container and allow it to drip into a cup.

Cooper introduces me to his patented survival kit, a metal tin the size of a large block of cheese. It contains more than 30 items that will keep me alive once I know how to use them. Some inclusions are obvious (compass, knife, flint); others, less so (stock cubes, potassium permanganate tablets).

Each implement has vital – often multiple – purposes. What’s the most important thing inside the kit? “It depends,” says Cooper. The mirror and whistle are vital when it comes to attracting attention. Plastic bags are essential if you’re running out of water. However, fire – provided by the flint – is a priority people often ignore. Fire doesn’t just provide warmth: it purifies water, cooks food, sterilises tools, provides psychological comfort.

After several hours of orienteering, map reading and fire-lighting training, Cooper tells me he’s departing for the evening. He’ll only be a short drive away, he says, then leaves me a two-way radio in case … well, in case something happens. 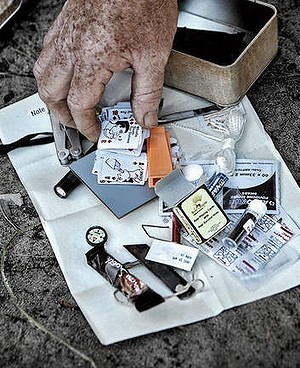 As I watch his vehicle pull away, I’m surprised I don’t feel panic. Instead, I feel weirdly confident: I can make this work. First, I do the homework Cooper has given me and construct a large tripod of branches in the middle of the road – to attract the attention of hypothetical passers-by. Nearby, I set up my campsite. It takes a while to make the flint work, and I swear violently every time I strike the metal fruitlessly. But finally, sweating, I produce a flame by setting alight a shredded cotton pad.

Dinner tonight will be a broth of boiled nuts, made using stock cubes and cooked in a metal can, and native sandalwood and quandong nuts that Cooper found earlier. I unshell the nuts by smashing them between two large rocks. It’s surprisingly hard work. I’m sweating and hear ape-like grunts involuntarily escaping my mouth. In survival situations, Cooper says a stock cube can go a long way – even the tiniest sliver can add flavour to an otherwise tasteless meal. After all that work with the nuts, I decide to indulge myself and use both of them: one chicken, one beef. 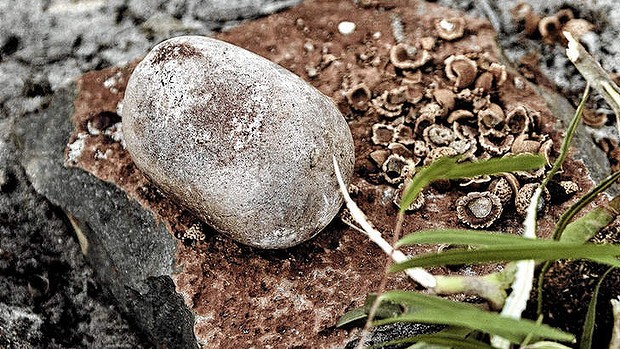 By the time I finish dinner it’s only just past 7pm and, with little else to do, I figure I may as well go to bed with my iPhone. My bed tonight consists of two hessian sacks and an emergency blanket. If I didn’t have the hessian sacks, I could have used soft weeds that grow to a metre tall out here. I dig a small groove for my butt, lie the hessian sacks down and pull the reflective blanket over me.

To my amazement, 3G reception is strong. Sure, I’m about to dig a hole in the ground to take a dump but, hey, I can also brag about it on Twitter, Facebook and Instagram! And I do just that for the rest of the evening until my battery runs out.

Getting to sleep is another matter, though. I discover a full moon can be insanely, distractingly bright. I oscillate between feeling cold and suspecting the emergency blanket is baking me alive. Mosquitoes attack me with force, zipping in and out of my ears, literally eating my face. Reaching around blindly, I grab a mosquito net and wrap it around my face as if it were cling wrap.

The next day, Cooper rolls up just after 5am. Groggily, I stand up, the mosquito net still twisted wildly around my face. A pair of kangaroos stare at me, unimpressed. Cooper’s brought me some pigface for breakfast and I make some tea. While the water boils, we find our gum-tree bag now has about a cup of water inside. I drink it and marvel. The water is minty, eucalyptus-infused and pure.

As we finish up, Cooper hands me back my survival kit, like a medal. “And if I catch you anywhere in Australia, out and about, without it …”

“You’ll shoot me with a rifle?”

“Nah, I’ll beat you with a frill-neck lizard.”

I can’t help feeling a little smug. You could place me in the middle of nowhere, and I’d really be fine. I feel indestructible. Nothing can beat me. Then, five minutes later, we drive past a supermarket. Turns out it would have taken me less than an hour to reach it by foot, had I needed it.