Lost in the desert? Here’s what to do…

Outback survival teacher Bob Cooper runs survival, snake handling, tracking and tool makeing courses from his base just outside Perth, primarily for people situated in or travelling through isolated areas. He believes five simple tips could have saved the lives of the 53 people who have become stranded and died in remote WA during the past 25 years. 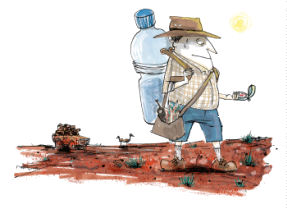 “If you sip water, the first sip goes to your digestion, the second to your liver and kidneys and none gets to your brain,” Bob says. “You need to drink a cupful or those pirates will rob it from you.” For example, if you are drinking 2l of water over a few hours, drink eight cups, not 200 sips.

Any survival kit should take into account the five most important factors: water, shelter, warmth, signals and food. “Keep food down the bottom of the list,” Bob says. “No-one’s died of starvation in Australia, including the explorers. It’s all dehydration and exposure.”

Although many people tell someone where they’re heading and their expected time of arrival, Bob says they often don’t set out what actions that person should take if they don’t check in by the required time. An action plan needs to be knowm by both parties. “Then the person in need of rescue can relax – I know what you’re going to do and on what day you’ll do it.” Bob says.

4. TAKE DETAILED, UP TO DATE MAPS

Bob describes the death of two blokes driving the Talawana Track in central WA in February a few years ago, who were using tourist maps they’d picked up from a service station. They broke down, ran out of water and walked 9 km along the track looking for water. A detailed, up-to-date map would have shown them that had they walked the other way for a similar distance they would have found a reliable water source.

Just as an elite athlete or gymnast visualises moves before competing, we need to mentally rehearse how we’d cope if things happen that we can’t control. Bob emphasises that it’s fear of the unknown that often leads us to behave irrationally and make poor survival decisions.